Dead and Not So Buried

Hollywood is rocked when someone breaks into the crypt of a 60’s movie star and kidnaps her corpse. Dubbed the Gravesnatcher by the press, the madman then holds Tinseltown hostage as he uses extortion, blackmail and murder to extract his own brand of revenge.

And caught in the middle is quick-witted PI Gideon Kincaid, an ex-cop with a troubled past who is led on a harrowing roller coaster ride through the sun-and-sin-drenched Hollywood landscape.

But Gideon’s not alone. There’s the tough as nails cop assigned to the case. Unfortunately, she’s Gideon’s ex-wife and hates him. And there the beautiful starlet who Gideon has to protect. Any red-blooded detective would want to sleep with her; unfortunately for Gideon, he already has. And it didn’t go well.

As the Gravesnatcher works his way through his own personal enemies list, Gideon is in a race against time to stop him. Can he put a stop to the crime spree before Gideon himself ends up dead and very buried? 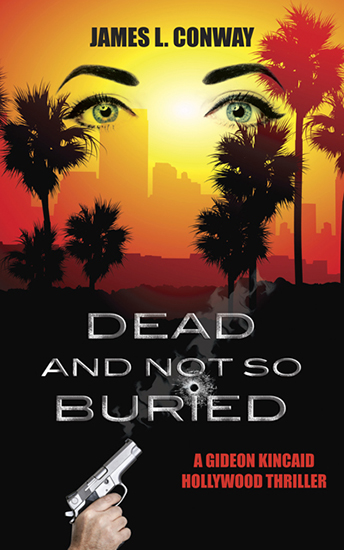 “Screenwriter Conway hits the ground running with this entertaining, debut Hollywood potboiler with a likable PI and tongue-in-cheek humor. It’s a clever mystery with one more satisfying twist at the very end. Great fun.”
—Library Journal

“His characters breathe on the page and are enlivened with emotions and desires that are nearly palpable. Add frequent plot twists that are capped by a satisfying ending, and you have a mystery novel of the hardboiled school that is sure to keep even the most ardent reader guessing.”
—New York Journal of Books

“This mystery has all the markings of a bestseller. James L. Conway proves with his first novel that he knows how to write a great mystery with a likeable lead character that leaves his readers wanting a sequel or maybe a series.”
—Suspense Magazine

“The worst day of my life began with an orgasm. His, not mine. So what else is new…”

So begins the unforgettable adventure of Grace Taylor, an adorable young actress trying to make it in Hollywood. But she’s having a really bad day. She is dumped by her boyfriend, fired by her agent, and kicked out of her apartment—then things get really nasty…

Grace comes to the rescue of a friend, Madison, a gorgeous redhead with a deadly secret. During the struggle Grace kills a man in self-defense—a dangerous man with a lot of dangerous friends—forcing Grace and Madison to run for their lives.

Pursued by the mob, wanted by the cops and the FBI, Grace and Madison find themselves in a firestorm of bullets, blood, betrayal, kidnapping and murder.

Sexy Babe is a wild and wicked thriller full of humor, unforgettable characters and nonstop action.

Alice was hot. Blonde hair. Green eyes. Great body. And smart. Only one problem, she was a cold-blooded murderer. But Alice wasn’t just targeting anyone. She had a list of men who had to die. Men who deserved to suffer because of what they did to her.

The cops called her the Lady in Red. And two of LAPD’s best homicide detectives were trying to stop her, Ryan and his beautiful partner, Syd. They were ambitious, talented detectives with a secret—they were also lovers. But the secrets didn’t stop there. Ryan and Syd also hid deadly secrets from each other.

In Cold Blonde is a fast-paced, sex-fueled thriller packed with captivating characters, unexpected plot twists and a 47-million-dollar surprise that changes everything.

Buy now
We use cookies to ensure that we give you the best experience on our website. If you continue to use this site we will assume that you are happy with it.OK